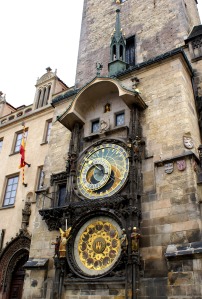 The Astronomical Clock is in Prague, which is in the Czech Republic. The Astronomical Clock always has a little parade every hour. If it’s twelve o’clock, the skeleton rings the bell twelve times. We always counted. And it always has a little parade and it shows all the Apostles. We went to the next one but the skeleton didn’t ring it six times. We were wondering why it didn’t ring six times when it was six o’clock. I tried to figure it out. I thought that the skeleton was just broken. When the skeleton rings the bell, it’s like we were walking in a real parade. There were a lot of other people there to see it. I’m sure the other people were wondering why the skeleton didn’t work when it was six o’clock. There aren’t any numbers on the Astronomical Clock. It doesn’t tell what time it is; it tells what month it is and what time it is in space. My daddy, my mommy, and I went up to the top of the tower, even though my daddy is afraid of heights. You can see the whole city from up there! The people looked like little tiny ants. But we went up a few stairs and then we saw an elevator. We didn’t know it was there but we took the elevator to the top of the tower. While we were up there, we heard it ring. I still don’t know what happened with that skeleton.

Prague from the top of Old Town Hall Tower