We went to a palace today that belonged to Empress Elizabeth. It has a children’s museum with a ghost that lives there. His name is Poldi but I call him Ghostly. He is in every room. I needed to find a bunny so I could get a prize and I did. It was in a drawer. A boy helped me find it. It was teamwork; we found it together. The bunny was reading a book. It was really cool. Then I marked where it was and I got paper that has Ghostly on it. I won that for a prize. 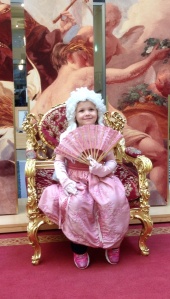 I dressed up like a queen and it was really fun. I wore a dress and also rode a horse but it was not real. I saw the toys that belonged to the kids that lived in the palace. There were building blocks, dolls, a little desk, a playhouse, and a duck on a string that quacks – but there was no duckling that goes with it.

After that, we went through a maze and I found the climbing bars. I tried to climb up the climbing bars but I couldn’t climb up. At the playground, I met a new friend and she didn’t speak English. But we could still play together and be friends. We played in the sand and made a sand pile. I hope we can do that again here if we come back. I like making friends that live all over the world.

6 thoughts on “My day at Schönbrunn Palace”